It’s that time again. November is upon us. We are a few short days away from the beginning of another NaNoWriMo. Some of us are brimming with ideas and research, plots, characters and dialogue, just waiting for the stroke of midnight on November 1st so we can start writing. And then there are others of us who are still staring out the window trying to decide which idea we want to write about.

I’ve got my idea, and some notes and an outline. I’ve even cleaned my desk and cleaned out my laptop bag for road trips to write-in locations. I need some chocolate and I’m all set. But there’s more to check on before we write. Do you have writing buddies? They help keep you accountable and on target to reach your word count, even if they’re not writing. And plant some reminders in odd spots that you’ll come across throughout the month to remind you why you’re on this crazy journey called NaNoWriMo. Stock up on coffee and chocolate. Charge your laptop battery. Plan your backup copies of your manuscript: email it to yourself and a trusted friend, save it to a zip drive, send it to the cloud, print it out. Keep it in more than one place that you can access it more than one way. Okay, are you ready now? Let’s get ready to write…

The weather in my native North Carolina is finally starting to feel like fall. We routinely have very warm nights in October all the way to Halloween but this year we are already getting low temperatures in the 50’s and 40’s. The leaves are turning and the mountains are even starting to get frost warnings. I love the fall.

I rearranged all of my furniture and stuff a few days ago. It had been over a year. I didn’t realize it had been so long. When we don’t change things up we get stuck in a rut. We may not realize it but we start to stagnate in our own stench. Sounds appetizing, doesn’t it?

Our energy, our chi, flows around us and moves with us. When we don’t let it have some room to breathe it becomes stale. It needs fresh air now and then to re-energize it. That includes our spaces and how we arrange the things around us. Yes, the way you stack the magazines on the coffee table can actually be important. Did you know that the principles of feng shui say not to store anything under your bed? It blocks energy flow at night when you are the weakest. Now, ask me how much stuff I had to relocate from under my bed after a whole year…

Turn off the news. Ignore the politics for awhile. Get outside and enjoy the sunshine and the cooler breeze. Appreciate the leaves turning red, orange, and gold. Decorate your porch with pumpkins and scarecrows and mums. Recharge your energy before winter gets here.

I’m doing my favorite thing for my birthday. I’m hosting one of my favorite people on my blog. Karina Fabian is a wonderful writer I have been honored to call a friend for several years now. She has several books available through Amazon, her site Fabianspace, and all over the internet. Seriously, Google her.

Her latest release from Full Quiver Press, Discovery, is about nuns on an exploratory mission to investigate a crashed space ship on an asteroid. I asked Karina about how science fiction and our current technology were related. It got her started on why she loves writing science fiction. Check out her response below. Then go over to her site and check out all of her work. 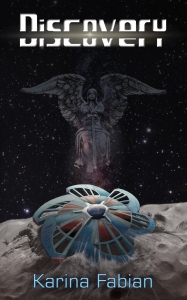 Why I Love Writing Science Fiction

One of the best things about being a writer of science fiction and fantasy is that sometimes, science fiction comes true. Communicators and replicators of Star Trek are cell phones and three-D printers of today, for example, but there are scores of different technologies that were imagined or popularized by science fiction writers long before they became practical technologies.

Second, science fiction authors, even when not scientists themselves, often study science and think about the applications. For my own stories, like Discovery, I had to study VASIMR drives and spacesuit technology. I then pushed that technology about 150 years into the future, imagining what we could do if untried research came to fruition and widespread use. Other writers (and me, in other stories) push the envelope further, taking wild theories and imagining their applications and consequences, and when no theory is available, creating one in a “What if”?

The final reason – and my favorite – is that scientists are inspired by science fiction. It’s no surprise that the communicator of the 1960s Star Trek became the flip phone of the 80s. The inventor was directly inspired by the design. Many other Star Trek technologies, even the outlandish idea of warp drive, are being studied by scientists today. In print, we can point to Jules Verne, whose story, “Five Weeks in a Balloon” inspired Sirkorski to invent the helicopter.

As technology grows, so do writers’ imaginations, and those imaginations spark further growth in science and technology. It’s a wonderful symbiotic relationship that makes me proud to be a science fiction writer.